Midfielder Jorginho was guilty of a woefully misplaced back-pass that ended with Gunners youngster Smith Rowe slotting home early in the first half at Stamford Bridge.

Thomas Tuchel’s home side were bereft of quality in the final third as they succumbed to only a third defeat in their 26 matches in all competitions.

The Blues remain in fourth place, but their bid to qualify for next season’s Champions League via a top four finish is now on a knife edge.

They sit six points clear of fifth placed West Ham, who have a game in hand, and seven ahead of sixth placed Liverpool, who could be the biggest threat with two games in hand.

Chelsea’s tepid display was hardly ideal preparation for their attempt to win the first trophy of Tuchel’s reign in Saturday’s FA Cup final against Leicester at Wembley.

That will deny Tuchel the chance to rest players before the Champions League final against Manchester City on May 29.

Eighth-placed Arsenal’s first league double over Chelsea since 2003-04 was a rare bright spot in a turbulent season.

Gunners boss Mikel Arteta is fighting to persuade the Arsenal hierarchy to keep faith with him after their lacklustre Europa League semi-final exit against Villarreal.

The Spaniard insists his side “have made progress in many areas” this season, even though are likely to miss out on European football for the first time since 1995-96.

Against that troubled backdrop, beating in-form Chelsea was evidence that Arteta may yet to be able to revive Arsenal’s fortunes.

Keeping one eye on the FA Cup final, Tuchel made seven changes from the side that won at Manchester City on Saturday.

Kai Havertz was one of those restored to the line-up and the German forward wasted a golden opportunity to put Chelsea ahead.

Havertz alertly caught Pablo Mari in possession near the half-way line when the Arsenal defender tried to take an extra touch rather than clear.

Sprinting through on goal, Havertz had just Bernd Leno to beat but fired high over the bar.

Arsenal made the most of that escape to take the lead thanks to Jorginho’s gift in the 16th minute.

Smith Rowe notched his first Premier League goal against West Bromwich Albion on Sunday and the 20-year-old’s second may prove to be one of the easiest he ever scores.

Jorginho carelessly failed to check where Kepa Arrizabalaga was positioned before passing well away from the Chelsea keeper from the edge of the area.

Kepa scrambled to claw the ball off the line, but Pierre-Emerick Aubameyang pounced and teed up Smith Rowe to tap into the empty net.

Mason Mount was denied when he ran onto Havertz’s pass and saw his shot turned away by Leno.

Chelsea kept creating but couldn’t find the final touch, with Christian Pulisic heading over from close-range after Kurt Zouma’s effort fell to him.

The Blues had lost their last eight league games at Stamford Bridge when trailing at half-time, last winning from that position in 2013.

Tuchel’s men dominated possession but Arsenal defended with a tenacity that eluded them for much of the season.

Pulisic thought he had equalised when he bundled home from Havertz’s flick on the hour, but the goal was correctly ruled out by VAR for offside.

Chelsea were inches away from equalising in the last minute when Zouma’s header was tipped onto the bar by Leno before Olivier Giroud’s follow-up cannoned off the woodwork. 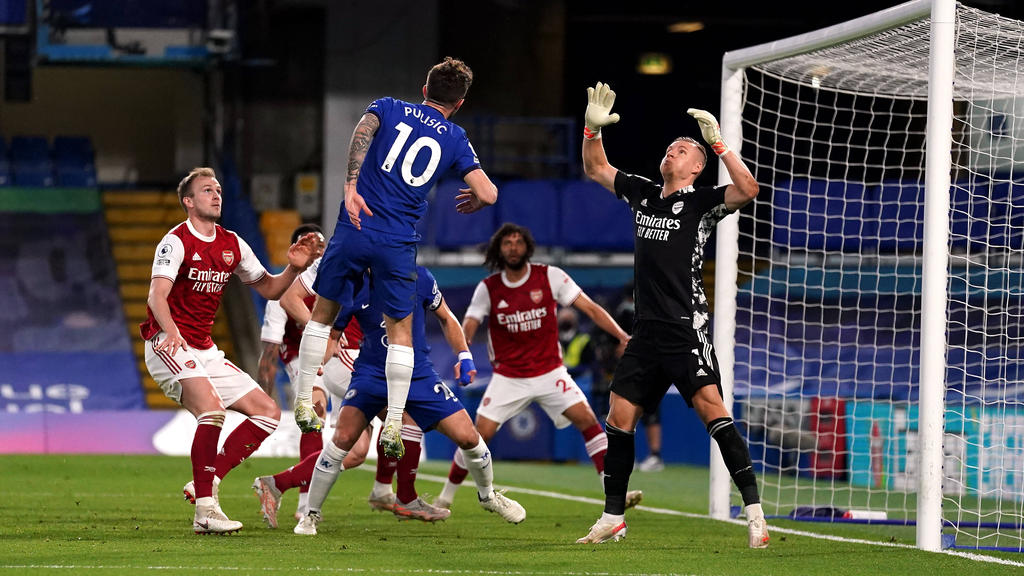